← back to
iapetus
Get fresh music recommendations delivered to your inbox every Friday.
We've updated our Terms of Use. You can review the changes here. 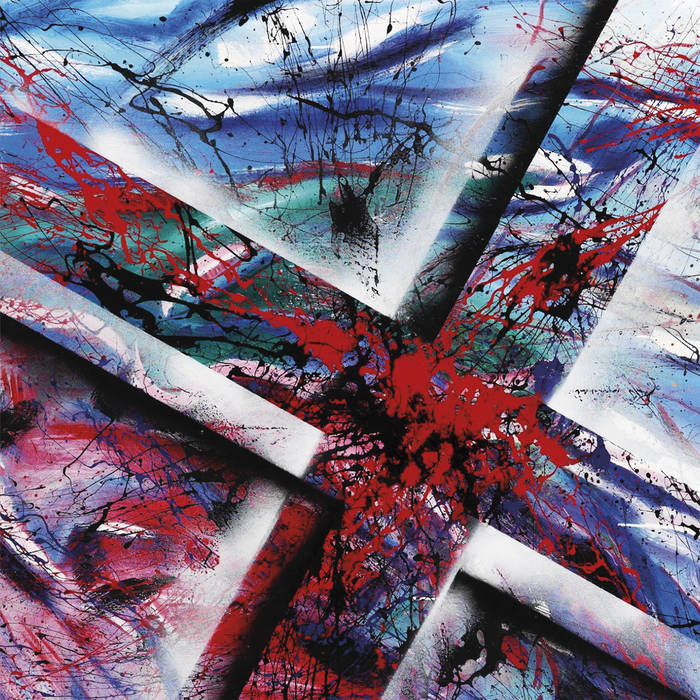 Nick Bradey Superb set - both Markus Reuter and Trey Gunn are involved: I will now check up on
the other listed personnel .Lee Fletcher is already in my collection, the other musicians
listed now need to be explored .Bernard Wostheinrich is also familiar to me : another
marker of excellence .I recommend this set unreservedly!
Favorite track: Feeling unity.

Georges Kieffer It has been a long time since I last descaled my neurons so deeply! This album is a killer, a good way to update the conceptual, to shake up everything that has been done so far in this area. Sorry, I'll leave you. I'm going back, it's so good ...

“I’m glad that I live in a world where music and sound art like this are a reality. So much detail, a lifetime of creativity incorporated into an insane long-form opus. This is the musical place where ideas and idealism meet. You all should treat it with respect”
Markus Reuter

“Fucking A! Great work. Super great. I wasn’t sure what to expect. But this exceeds anything I could have conceived of.
Very, very classy. And very, very well composed!
Everything in this work sounds like it could have come from another planet.
An extra-terrestrial composition.”
Trey Gunn

A warning from the Editor:
Please consider being in a rested state, wide awake in order to maintain concentration whichever duration you may define for listening to this music, at the risk of being annoyed.
The music is voluntarily extremely busy, in an attempt to provide the informed auditor with a diversity of sounds, melodies and arrangements.
In this piece you will find moments of concrete music, ambient, minimalism and electronics, contemporary choir music, progressive and industrial rock, and improvisation.
The signatures, modes and harmonic progressions display a research for some originality, although the classical 12-tone scale and simple polyrhythmic patterns remain the general frame.

...was the sound of the two divided halves of her body slithering down to the floor of the Métro carriage, leaving only a shimmering golden rod hovering just off the ground. That was all that remained from the attractive young woman I thought I’d seen standing up and undressing a while ago, while I was sinking into a strange torpor. The glitching sound had drawn me back to conscience, however, with the uncomfortable impression that I’d been breathing in the substance of somebody else's dream.

Child-like memories were floating around. I was seeing landscapes of infancy under a cartoon sun, with fairy-tale characters wandering around; so much more real than the clear blue sky. Through the carriage window I could see a merry-go-round forming with Little Red Riding Hood, Tom Thumb and Eustache the Little Elephant; Prince Ahmed; the fairy Paribanou; and so many others.

There were quite a number of wolves too.

The latter made me remember of the vision I’d had, most nights, when I was a child. I would be lying in my bed, under a heavy quilt and blanket, while on top of me the shadow of a cat would be silently, blindly, weaving its way up from my hips to my face. I would feel the movement by the weight of its paws pressing on my chest through the quilt. I would be unable to do or even think anything, for fear that the feline shadow would become flesh, finally rear up and finally reveal its eyes and draw its claws out to end it all.

In each of these dreams, the shadow was solid black, as was the thick air around me, and it had certainly not been my eyes which were informing me of the tricky situation I was stuck in. I was inspiring a slice of night. The colorless substance was flowing down to my mouth, forming a ball that kept on rolling and inflating in an ever-slowing yet ceaseless motion. My tongue, cheeks and teeth were becoming softer, like marshmallow; my whole oral cavity was soon starting to inflate, and so was my head and my entire body; becoming lighter, gradually merging in an environment now completely anaerobic.

I was gently paralyzed, but I was no longer in terror. I understood that I was transforming into another body – alive, alike. I was beginning to trust the inside.

An old lady sitting next to me suddenly shouted “Stop this, it’s disgusting!” and my attention came back fully. Strangely enough, her looks and stance had some similarities to those of the stripped girl who had just disappeared. I just couldn’t figure out what these were. No-one seemed to care,
they carried on as if nothing was there -, but I realized that my recorder was on. So, if all of this scene had been real, the whole sequence should now be on a file; under the generic name, extended with “_3”.

The golden rod had faded away and the train was stopping at the Parc des Expositions in the suburbs of Paris; or, as it was sometimes more aptly named, the fairground. This happened to be my destination – and not by chance. After that draining business meeting at La Défense, I was going to attend an exhibition which had come to my attention via an invitation I’d received a few days earlier.

The park was huge, and it took me quite a while to reach the venue. I had to follow the signs marked “Concrete Mandala”, which were not easily visible. I walked along gigantic halls and lawns, pursuing a geometry which seemed to have banned the oblique line. Nowhere to shelter from an avid sun that was teasing the sweat out from under my suit. For several minutes I walked and huffed in the dry heat. Should I undo my tie, and let my shirt hang open?

The place was much smaller than expected – just a group of constructions leaning on the side of a large empty hangar. Upon entering, I was surprised by the retro-Futurist aspect of the booths: not many more than ten or twelve of them, organized along an S-shaped walkway in a manner and flow which somehow made one feel simultaneously cozy and enthralled.

Many of the features presented captured my attention. The first booth was showing objects from our daily lives, sculpted using old PCBs and bearing electronic components dating from before the operational amplifier: ancient capacitors, inductors, resistors, transistors and even some vacuum tubes. Another stand sported multiple bouquets of artificial roses, composed of myriads of very fine iron threads and tin; all silvery, with red and green tints and reflections. Inevitably, the agglomeration of flowers-in-wire made each bouquet look like a connectome – the neuronal network of the brain. Coupled with the long thin vases used for the display, the whole stand looked like a congregation of aliens deciding on some unknown strategy for our planet.

There were only a few people around, and I was unhindered from wandering further along the walkway and enjoying the various other displays presented. Everywhere, it was obvious that raw and vintage materials had been arranged together using the most advanced machine-learning techniques.

In a corner close to the end of the exhibition, I came across a stand delivering Oriental cookies, and mint tea served from a silver samovar shaped with strange angles and curves (as if designed by Druillet or Gaudi). I stopped to refresh myself and to regain some composure. Looking around from this location, I couldn’t help but admire the lavish mix of plastics and aluminum from the floor to the ceiling, creating a natural harmony and a sense of awe; all the stranger, since everything was so clearly manufactured and artificial.

My gaze came to rest on a small door, just a few feet away from the tea stand. I thought “this could be the exit, or some sort of stage door.” Shortly afterwards, I pushed the handle in order to find out. Behind the door there was a wooden construction staircase leading to various lodges, which I descended. I caught sight of people getting ready, making up like actors for a show. I remained quite discreet, walking down one more staircase to finally arrive in a wide empty room. This could well have been the storage space for all of the items I’d seen displayed above, although there were no shelves or containers – just a couple of tin cupboards that I didn’t open (in the end, I remembered that I was only a visitor). Only a few old computers – models from the 1980s – were lying in a corner.

Ascending the staircase, I went up to the lodges again, and everybody had gone. I quickly climbed back up to the exhibition, assuming that something was happening: and such was the case. PVC benches had been deployed around the space on one side, as if in a kindergarten classroom or a motorway service area, and a play was being performed on the other. It was now that I recalled, from the brochure, that a four-act play was being presented at regular intervals as an entertaining element for the public to focus on. “They missed the point with me,” I thought. I didn’t know which part of the play was being performed, anyway; and although the venue was not so big, I couldn’t hear the dialogue very distinctly. From where I stood, it was all too confused.

It didn’t take long for me to become bored, so I went down the staircase again. One lodge was still occupied. Approaching the door, I saw a lady in her mid-forties sitting in front of a makeup mirror, putting on some lipstick. Maybe she was preparing for Act Four or something. Despite the age gap I felt she shared some qualities with the women in the Métro carriage.

As she turned towards me, it was this – plus the friendly smile that I saw – which made me decide to step in.

She said “Actually, I was waiting for you.”

“Yes,” she said. “But you need not worry, because all you’ve gone through is now part of you.”

It was she who closed the door. Feeling a sudden desire, I took her into my arms. We kissed; then, methodically, we undressed. We dropped all of our clothes into two neat piles. Then we went to the sofa and made love. We felt our bodies melt – “mum to mud to mad to dad”, as the song says.

When we had finished, she looked at me again and pronounced these words: “We all play a role in life. When I take a kitten onto my lap and it starts purring; when I feel it completely relaxing into my arms and letting go... well, at the same time, I feel relieved. It doesn’t really care about my mood, but there is evidence that this is the only way to be comfortable. Whether it’s us or someone else, who cares? That is just the role we are in, and the stress is no more.”

I must say that I was not surprised at all by what had happened. I knew that I had known her from before.

Soon we heard noise from the staircase. People were coming down hastily. Probably she was late for her entrance? Or was it just a test? I didn’t know, so I struggled hurriedly back into my clothes before the door opened.

Now I can't see you; I can't feel you anymore.
I've just a memory of that open door.

In The Name of…

This is an Unquiet Music Ltd  release

“The father”, “The holy spirit, “Amen” mixed by Markus Reuter
“The son” mixed by Benjamin Schäfer

Bandcamp Daily  your guide to the world of Bandcamp